XXV GASTRONOMIC DAYS OF THE PLATE OF MATARÓ 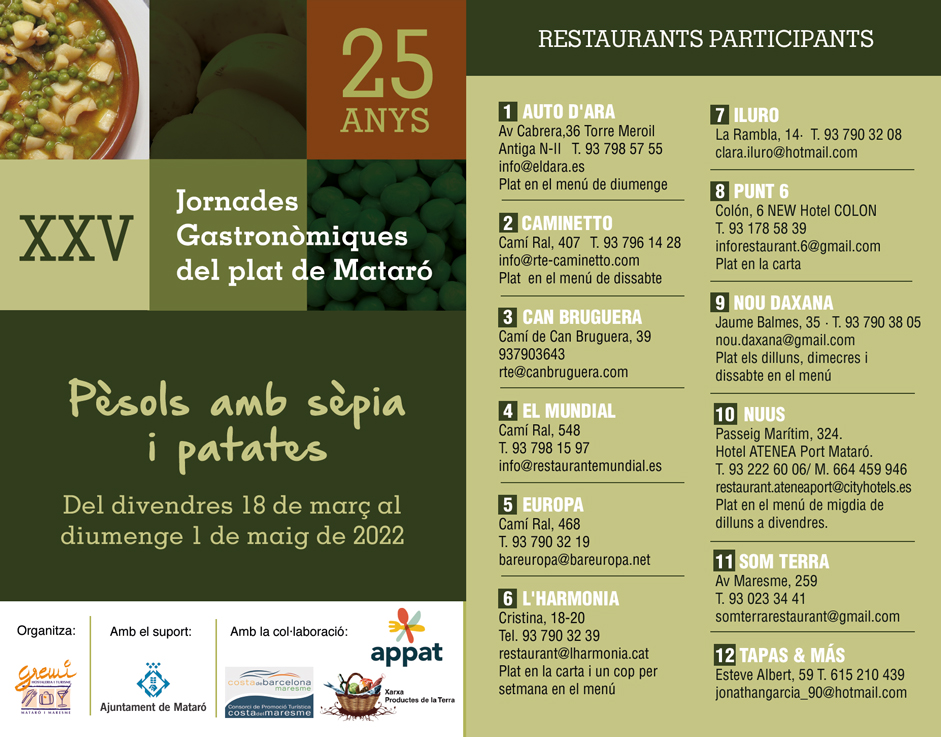 A QUARTER OF A CENTURY FROM THE MATARÓ DISH

It was at the end of 1997 that the Department of Economic Promotion of the City of Mataró, asked the Guild of Hospitality and Tourism of Mataró and Maresme to define a dish traditional, typical of Mataró that positioned in the city and that was flagship of the Mataró kitchen. The board of directors of the entity approved this local dish, a product of the land and of the spring season as representative of the city. This gastronomic adventure began in 1998, and over the years it would be framed within the Maresme Pea Days together with the Llavaneres Peas and the Caldes d’Estrac Pesolada.

The Maresme Pea, the floret or the carob tree was borrowed, also in agreement with the farmers of the region in order to promote this product of our land. Also the potatoes from Mataró, the formerly “Mataró potatoes” as they were known internationally and which were added to this traditional dish of Catalan cuisine, and the cuttlefish from our Mediterranean Sea. A perfect combination of local, land and sea products.

Over the years the event has varied in format and has positioned Mataro cuisine at the county, national and state level. This year, 12 establishments from the city of Mataró are taking part, 10 from the center and 2 from the outskirts of the city: Caminetto, El Mundial, Europa, l’Harmonia, Iluro, Punt 6, Nou Daxana, Nuus, Som terra and Tapas & More from the Center and Can Bruguera and Auto d’Ara on the outskirts. The gastronomic days are held this year between Friday 18 March and Sunday 1 May , so six weeks to taste Mataro cuisine.